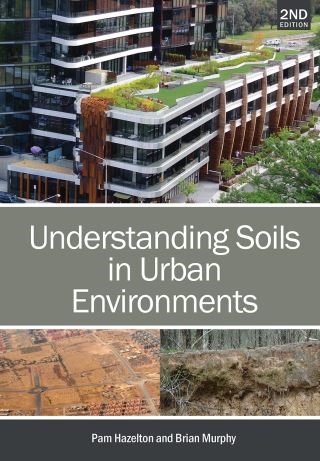 With an ever-increasing proportion of the world’s population living in cities, soil properties such as salinity, acidity, water retention, erosion and pollution are becoming more significant in urban areas. While these are known issues for agriculture and forestry, as urban development increases, it is essential to recognise the potential of soil properties to create problems for the environment as well as structural concerns for buildings and other engineering works.

Understanding Soils in Urban Environments explains how urban soils develop, change and erode. It describes their physical and chemical properties with a focus on specific soil problems that cause environmental damage, such as acid sulfate soils, and also affect the integrity of engineering structural works. This fully revised second edition addresses contemporary issues, including an increase in the use of green roofs and urban green space as well as manufactured soils in a variety of urban environments.

Understanding Soils in Urban Environments provides a concise introduction to all aspects of soils in urban environments and will be extremely useful to students in a wide range of disciplines, from soil science and urban forestry and horticulture, to planning, engineering, construction and land remediation, as well as to engineers, builders, landscape architects, ecologists, planners and developers.

Pam Hazelton: Dr Pam Hazelton has been a practising soil scientist for more than 35 years. She graduated in Science from the University of Sydney and gained her PhD for her work on semi-arid soils from the University of NSW. She was a consultant to the Soil Conservation Service, a soil surveyor in the Department of Conservation and Land Management and has worked with environmental consultants. She has been a lecturer at a variety of universities and in the Faculty of Engineering and IT at the University of Technology Sydney specifically focused on the environmental and engineering problems of urban soils. She is a former President of Soil Science Australia and also Vice President of the International Union of Soil Scientists Commission for Education in Soil Science.|||Dr Brian Murphy has worked as a soil scientist for 30 years with a strong focus on applied science. He graduated in Agricultural Science from the University of Sydney, from where he also gained his Masters and his PhD for his work on soil structure in cropping systems. His interests lie in the application of soil science to environmental management, hydrology, salinity and urban land use. His work involves providing day-to-day advice on the management of soils for a range of natural resource issues. He is also an experienced researcher and has published numerous scientific papers, and is an editor of the widely used textbook Soils: Their Properties and Management. He is a former President of the NSW Branch of Soil Science Australia.