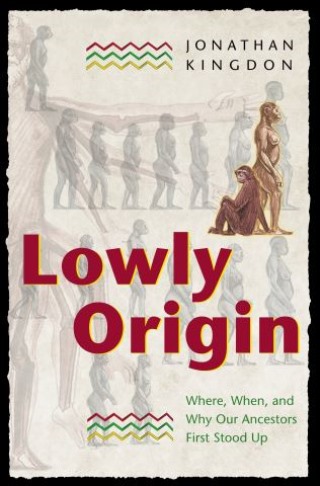 Where, When, and Why Our Ancestors First Stood Up

Our ability to walk on two legs is not only a characteristic human trait but one of the things that made us human in the first place. Once our ancestors could walk on two legs, they began to do many of the things that apes cannot do: cross wide open spaces, manipulate complex tools, communicate with new signal systems, and light fires. Titled after the last two words of Darwin's Descent of Man and written by a leading scholar of human evolution, Lowly Origin is the first book to explain the sources and consequences of bipedalism to a broad audience. Along the way, it accounts for recent fossil discoveries that show us a still incomplete but much bushier family tree than most of us learned about in school.


Jonathan Kingdon uses the very latest findings from ecology, biogeography, and paleontology to build a new and up-to-date account of how four-legged apes became two-legged hominins. He describes what it took to get up onto two legs as well as the protracted consequences of that step--some of which led straight to modern humans and others to very different bipeds. This allows him to make sense of recently unearthed evidence suggesting that no fewer than twenty species of humans and hominins have lived and become extinct. Following the evolution of two-legged creatures from our earliest lowly forebears to the present, Kingdon concludes with future options for the last surviving biped.


A major new narrative of human evolution, Lowly Origin is the best available account of what it meant--and what it means--to walk on two feet.

Jonathan Kingdon: Jonathan Kingdon is a Senior Research Associate at the Institute of Biological Anthropology and Department of Zoology of Oxford University. He is the author of and artist for numerous books, including Self-Made Man and Island Africa (Princeton). The Millennium issue of American Scientist named Kingdon's Atlas of Evolution in Africa one of the "100 books that shaped a century of science."