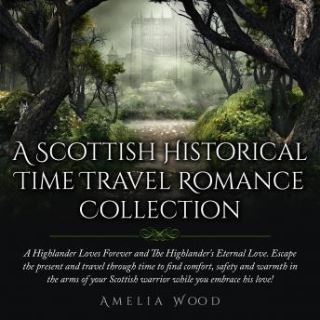 A Highlander Loves Forever and The Highlander's Eternal Love. Escape the present and travel through time to find comfort, safety and warmth in the arms of your Scottish warrior while you embrace his love!

A Highlander Loves Forever: In the twelfth century Scotland, after the recent death of his father, Blane Cameron had just stepped up as Laird of one of the largest and most prosperous lands of the Highlands, but a woman from his past isn't ready to let him succeed. A witch, wielding the magic of the Sith, will stop at nothing to destroy the man who couldn't love her back.Present day Jade had given up on men. Having not found even a spark of love, she's decided that the passion and magic everyone else seemed to find so easily was not for her. But when a haunting voice leads her into the past, she'll have more than her fair share of men to deal with, and she has more than a spark with the handsome but distrustful laird.Blane doesn't trust the strange woman claiming to be from the future.

The Highlander's Eternal Love: Laird Brodie Cameron was focused on keeping his clan safe during a time of uneasy peace. He had no time to marry, but without an heir, the Cameron clan is vulnerable. Taking things into her own hands, his sister Hilda blackmails the grandson of a powerful witch into casting a love spell, but rather than making Brodie fall in love, the spell searches for his true love…and pulls her through the constructs of time.In present day New York, Emma's life had been stale for awhile, and her cynicism only grew, but it isn't until she falls through a portal and lands in Medieval Scotland that she realizes she'd put her life on hold. She's willing to give the gorgeous Highlander a chance if it means that she'll have the future with love and family that she's always wanted.Brodie doesn't believe in the magic of love, but when he gives into his desires, the nights turn hot, and he risks losing his heart. When Emma discovers that she's pregnant, she learns that there is a way for her to go home.

Get ready to be immersed in a world full of magic and true passionate love!