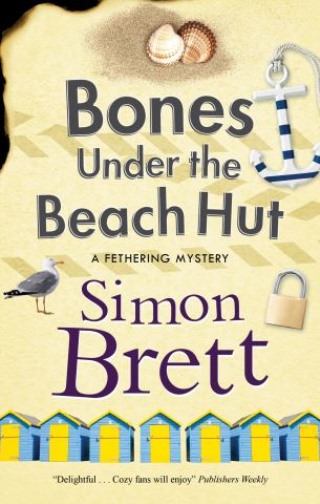 Bones Under the Beach Hut

Welcome to Fethering! Amateur detectives Carole and Jude investigate a slaying by the seaside in this quirky, cozy, British village mystery. Carole is delighted to take ownership of a beach hut in the affluent nearby seaside resort of Smaltings - until, that is, human remains are found under the floorboards. Who do the bones belong to - and who put them there? Carole and her best friend Jude are determined to find out. Their suspicion quickly falls on attractive Philly Rose, a young Londoner newly arrived in the area, whose boyfriend has recently vanished in mysterious circumstances. But Kelvin Southwest, self-appointed 'ladies' man' and caretaker of Smalting's beach huts, seems to be hiding a dark secret beneath his smooth exterior . while Reginald Flowers, pompous President of the Smalting Beach Hut Association, is also strangely defensive about his own history. As Carole and Jude dig for the truth, one thing becomes clear: there are secrets buried deep in Smaltings, which someone is determined will never reach the surface.

Simon Brett: SIMON BRETT worked as a producer in radio and television before taking up writing full-time. He was awarded an OBE in the 2016 New Year's Honours for services to Literature and also was elected a Fellow of the Royal Society of Literature. In 2014 he won the CWA's prestigious Diamond Dagger for an outstanding body of work. simonbrett.com