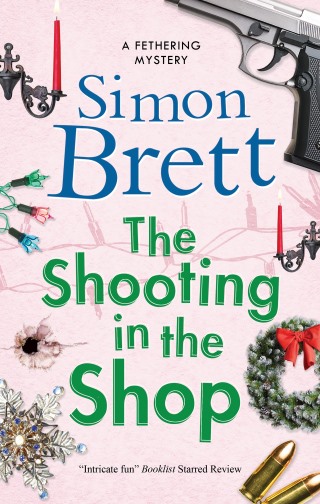 Shooting in the Shop, The

Welcome to Fethering! Christmas turns killer for amateur sleuths Carole and Jude in this quirky, cozy, British village mystery. Carole Seddon hates Christmas - it all seems rather a waste of time. So when her neighbour and best friend, Jude, drags her along to go shopping at a local store called Gallimaufry, she can feel her inner-Scrooge knocking. But the sales are on, and even Carole can't resist a bargain. A few days later, though, Gallimaufry is burnt down, and a body is discovered in the ashes. It seems like a tragic accident . . . but no-one can die of natural causes when a gun is involved. The victim was young, pretty and successful; who could possibly want her dead? With a host of suspects, the amateur detectives know they have their work cut out for them. And as they dig deeper they discover a host of half-truths and lies. It seems that someone in Fethering has a deep, dark, deadly secret - and is prepared to kill to keep it.

Simon Brett: SIMON BRETT worked as a producer in radio and television before taking up writing full-time. He was awarded an OBE in the 2016 New Year's Honours for services to Literature and also was elected a Fellow of the Royal Society of Literature. In 2014 he won the CWA's prestigious Diamond Dagger for an outstanding body of work. simonbrett.com