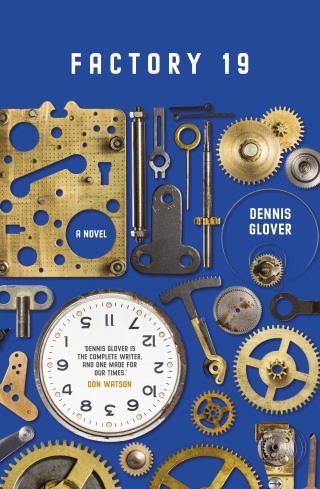 We’re told that the future will be brighter. But what if human happiness really lies in the past?

Hobart, 2022: a city with a declining population, in the grip of a dark recession. A rusty ship sails into the harbour and begins to unload its cargo on the site of the once famous but now abandoned Gallery of Future Art, known to the world as GoFA.

One day the city’s residents are awoken by a high-pitched sound no one has heard for two generations: a factory whistle. GoFA’s owner, world-famous billionaire Dundas Faussett, is creating his most ambitious installation yet. He’s going to defeat technology’s dominance over our lives by establishing a new Year Zero: 1948. Those whose jobs have been destroyed by Amazon and Uber and Airbnb are invited to fight back in the only way that can possibly succeed: by living as if the internet had never been invented.

The hold of Bezos, Musk, Zuckerberg and their ilk starts to loosen as the revolutionary example of Factory 19 spreads. Can nostalgia really defeat the future? Can the little people win back the world? We are about to find out.

‘Like Orwell, of whom he has written so brilliantly, Dennis Glover’s work is charged with courage, intelligence and purpose. He is the complete writer, and one made for our times.’ —Don Watson

‘Savagely hilarious and unlike anything else you’ll read this year. It boils with the anger of the present moment.’ —Rohan Wilson

Dennis Glover: Dennis Glover, the son of factory labourers, grew up in a town just like Factory 19. Educated at Monash and Cambridge universities, he has made a career as one of Australia’s leading speechwriters and political commentators. His first novel, The Last Man in Europe, was nominated for several literary prizes, including the Walter Scott Prize for Historical Fiction. Factory 19 is his second novel.