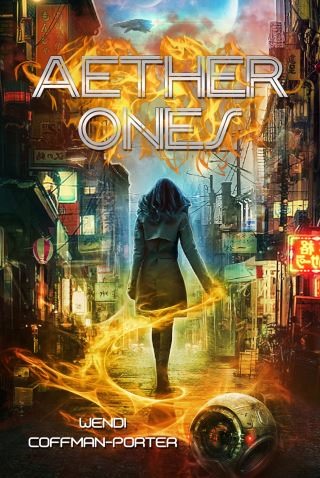 Long ago, the Great Sundering ripped the universe apart, creating two separate realities. The kuldain realm developed advanced technology, and its inhabitants travel the universe on massive ships to colonize and expand their empire. The aether realm, meanwhile, harnessed the magic of the massively powerful eldrich energy that connects everything within their realm. Now, a tentative peace reigns between the two realms, maintained by a treaty and by the Imperial Investigative Service—a force designed to monitor interactions between the realms and ensure that most kuldain inhabitants don’t even know aether space exists. Leilani Falconi, a talented agent of the IIS, polices the galaxy with quick sarcasm and a quicker temper. When a series of suspicious deaths in kuldain space threatens the secrecy and peace, Lei must solve the mystery—fast—before both her realities change forever.

Wendi Coffman-Porter: Wendi Coffman-Porter grew up an only child in a military family. She spent a lot of time as a child inventing new friends and sharing them with others. She began writing her stories down at the age of ten and by the time her first child was born she’d written her first novel. Her passion has always been the colorful canvas and creative freedom of fantasy and sci-fi. Be it roleplaying or writing in her office at home in Texas, with her pack of furry friends, she is always developing something new and colorful to share with others. Her fervor for incredibly rich realities that are as authentic as the ones outside your own window, is what drives her to constantly find out what’s happening around the next corner. Enabling her to reach a deep new understanding of the nature of life, no matter what form that life might take.