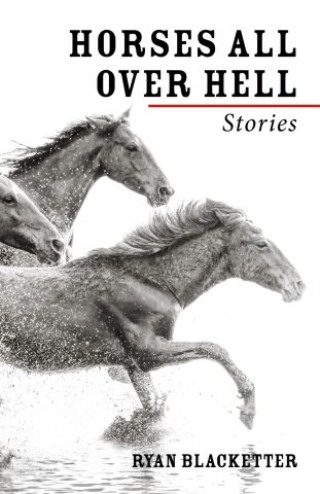 Horses All Over Hell

Horses All Over Hell follows the twin tensions of Marty's drinking and Joanna's newfound religious sobriety--in a small Idaho city on the Snake in the early nineties. In "Starlings," Marty and Aunt Darlene enter Joanna's bedroom with a sack of beer late at night, seeking to revive her old, drinking self. "They Work at Night" features Marty's escalating drinking. Also presented is Joanna's intense new friendship with an artist named Lucy. In "Sending Those People Home," ten-year-old Cory laments that his mom isn't like the other church mothers. He keeps her best photographs under his bed. Despite this family's troubles, and whatever their fate, they ache for each other and make their own, often poignant gestures toward love.

Ryan Blacketter: A graduate of the Iowa Writers' Workshop, Ryan Blacketter has received a literary grant from the Oregon Regional Arts and Culture Council and a prison teaching grant from the Idaho Humanities Council. His stories have appeared in the Antioch Review, Image, Crab Orchard Review, Alaska Quarterly Review, and elsewhere. He lives with his wife in Boise, Idaho.