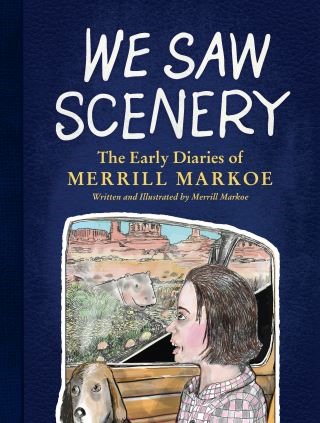 The Early Diaries of Merrill Markoe

“Merrill Markoe got all the talent. In addition to being an Emmy-award winning comedy writer, she's also a top-notch artist. We Saw Scenery is revealing, sad, funny, and, above all, relatable. Merrill captures the experience of a young woman finding—and holding onto—her own voice. And we’re all lucky she did.”  —Nell Scovell, author of Just the Funny Parts

In her first-ever graphic memoir, four-time Emmy-winning comedy writer Merrill Markoe unearths her treasured diaries, long kept under lock and key, to illustrate the hilarious story of her preteen and teen years and how she came to realize that her secret power was her humor. Wielding her layered and comically absurd style, Markoe takes readers back through her time as a Girl Scout, where she learned that “scouting” was really more about learning housewifery skills, to her earliest crushes on uniquely awful boys and her growing obsession with television.

Much has changed in our world since Markoe wrote in her diaries, or has it? Climate change wasn’t yet a rallying call, but the growing hole in the ozone preoccupied Markoe’s young mind. No one was flocking to the desert for Burning Man, but Markoe readily partook in the Ken Kesey Acid Test. As she charts the divide between her adolescence and adulthood, Markoe questions and berates her younger self, revealing how much is opaque to us in those young years.

Perfect for fans of Roz Chast, Allie Brosh, and Lynda Barry, We Saw Scenery is a laugh-out-loud story of a girl growing up, told from the perspective of the woman she became, and it will speak to all who wanted to understand themselves in the midst of their own maturing.

Merrill Markoe:
Merrill Markoe was the head writer for the original The David Letterman Show (the live NBC morning show that was recognized with a Daytime Emmy Award) and the co-creator and first head writer of NBC’s groundbreaking Late Night with David Letterman, for which she won three additional Emmy Awards. She engineered the majority of the show’s original concepts and created the segments “Stupid Pet Tricks,” “Stupid Human Tricks,” and “Viewer Mail.” Markoe also won a Writer's Guild award for her writing/performing work on HBO's Not Necessarily the News. She has written for television shows such as Sex and the City, Newhart, and Moonlighting and has written for many periodicals, including Rolling Stone, Time, US Weekly, People, Esquire, The New York Times, and The Los Angeles Times, and her cartoon work has appeared in The New Yorker. She was recently awarded the Paddy Chayevsky Laurel Award for Television Writing Achievement.