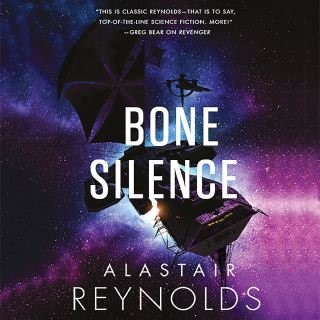 The thrilling finale to the Revenger Trilogy tells a desperate tale of greed, piracy, shadow governments, and ancient secrets that could unravel all of civilization
The Ness sisters ran away from home to become the most fearsome pirates in the twenty thousand worlds of the Congregation. They've plundered treasures untold, taken command of their own ship, and made plenty of enemies. But now they're being hunted for crimes they didn't commit by a fleet whose crimes are worse than their own. To stay one step ahead of their pursuers and answer the questions that have plagued them, they'll have to employ every dirty, piratical trick in the book....
Read more by Alastair Reynolds!
The Revenger Trilogy:
Revenger
Shadow Captain
Bone Silence