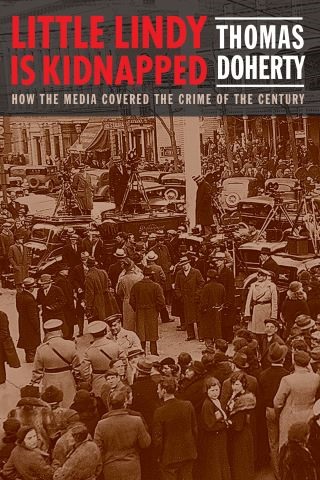 How the Media Covered the Crime of the Century

The biggest crime story in American history began on the night of March 1, 1932, when the twenty-month-old son of Charles and Anne Lindbergh was snatched from his crib in Hopewell, New Jersey. The news shocked a nation enthralled with the aviator, the first person to fly solo nonstop across the Atlantic. American law enforcement marshalled all its resources to return “Little Lindy” to the arms of his parents—and perhaps even more energized were the legions of journalists catering to a public whose appetite for Lindbergh news was insatiable.

In Little Lindy Is Kidnapped, Thomas Doherty offers a lively and comprehensive cultural history of the media coverage of the abduction and its aftermath. Beginning with Lindbergh’s ascent to fame and proceeding through the trial and execution of the accused kidnapper, Doherty traces how newspapers, radio, and newsreels reported on what was dubbed the “crime of the century.” He casts the affair as a transformative moment for American journalism, analyzing how the case presented new challenges and opportunities for each branch of the media in the days before the rise of television. Coverage of the Lindbergh story, Doherty reveals, set the template for the way the media would treat breaking news ever after. An engrossing account of an endlessly fascinating case, Little Lindy Is Kidnapped sheds new light on an enduring quality of journalism ever since: the media’s eye on a crucial part of the story—itself.

Thomas Doherty: Thomas Doherty is professor of American studies at Brandeis University. His previous Columbia University Press books include Hollywood and Hitler, 1933–1939 (2013) and Show Trial: Hollywood, HUAC, and the Birth of the Blacklist (2018).