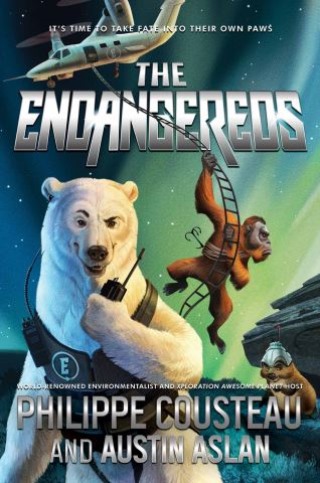 It’s time for animals to take fate into their own paws! The Endangereds is the first book in a thrilling new adventure series by world-renowned environmentalist and Emmy-nominated host of Xploration Awesome Planet Philippe Cousteau and award-winning TURBO Racers author Austin Aslan.

Innocent animals are in trouble: temperatures are climbing, tides are rising, and nature is suffering. Someone needs to step in to rescue animals from extinction. Someone needs to turn this mess around, before it’s too late.

And that someone is . . . the Endangereds, the unlikeliest heroes you’ll ever meet—a superstrong polar bear, a pangolin with a genius for engineering, an extremely sarcastic narwhal, and an orangutan with a big dream.

Together, these four daredevils are determined to save endangered species across the globe, no matter what the risk. Rappelling into an underground cavern to save the day? No problem. Looping video footage to sneak through buildings unnoticed? Got it covered. Opening a doorknob? Okay, pretty hard without thumbs. But don’t worry. No matter what it takes, the Endangereds will get the job done.

But when two of their friends get kidnapped by a villain with a dastardly agenda, the team finds themselves up to their snouts in trouble. Can the Endangereds save the day? Or will this villain put humans and animals alike on the extinction list?

The A-Team meets the animal kingdom in the first book in the thrilling new adventure series from the host of Xploration Awesome Planet Philippe Cousteau and award-winning author Austin Aslan.

Philippe Cousteau, the world-renowned environmentalist and Emmy-nominated host of Xploration Awesome Planet, is the coathor of The Endangereds, the first book in a thrilling environmental adventure series.

Austin Aslan is the author of The Islands at the End of the World and The Girl at the Center of the World. A National Science Foundation Graduate Research Fellow, he can often be found exploring the wilds of northern Arizona and camping in a tent on a punctured air mattress. Austin loves to travel widely, photograph nature, and laugh. Follow him on Twitter at @Laustinspace.