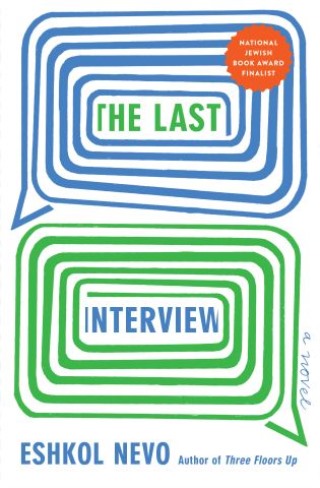 From the internationally best-selling author of Three Floors Up, a literary page-turner that delves into the deepening cracks in a carefully constructed public persona.

A writer tries to answer a set of interview questions sent to him by a website editor. At first, they stick to the standard fare: Did you always know you would be a writer? How autobiographical are your books? Have you written any stories you would never publish? Usually his answers in these situations are measured, calculated, cautious. But this time, when his heart is about to break and his life is about to crumble, he finds he cannot tell anything but the truth. The naked, funny, sad, scandalous, politically incorrect truth.

Every question the writer tackles opens a door to a hidden room of his life. And each of his answers reveals that at the heart of every truth, there is a lie—and vice versa. Surprising, bold, intimate, and utterly engrossing, The Last Interview shows just how tenuous the lines are between work and life, love and hate, fact and fiction. And in exploring the many, often contradictory facets of an Israeli author’s identity, Eshkol Nevo also gives us a nuanced, thought-provoking portrait of a country at odds with itself.

Eshkol Nevo: Eshkol Nevo, born in Jerusalem in 1971, is one of Israel’s most successful living writers. His novels have all been bestsellers in Israel and published widely in translation. His novel Homesick was long-listed for the 2009 Independent Foreign Fiction Prize; World Cup Wishes was a finalist for the 2011 Kritikerpreis der Jury der Jungen Kritiker (Austria); Neuland was included in the Independent’s 2014 Books of the Year in Translation; and Three Floors Up (Other Press, 2017) will be adapted for film by the acclaimed Italian director Nanni Moretti in 2020. Nevo owns and co-manages the largest private creative writing school in Israel and is a mentor to many up-and-coming young Israeli writers.

Sondra Silverston has translated the work of Israeli fiction writers such as Etgar Keret, Ayelet Gundar-Goshen, Zeruya Shalev, and Savyon Liebrecht. Her translation of Amos Oz’s Between Friends won the National Jewish Book Award for fiction in 2013. Born in the United States, she has lived in Israel since 1970.