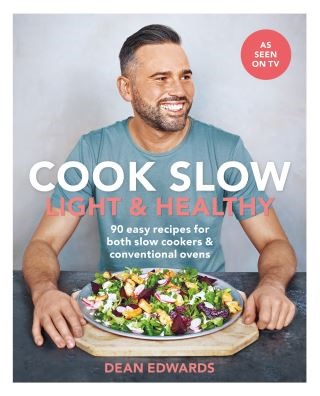 Following on from the success of Cook Slow, MasterChef's Dean Edwards returns with over 90 mouth-wateringly fresh and delicious recipes for perfect home-cooking.

Slow cookers are often confined to heavy winter recipes made with stodgy ingredients and with poor nutritional content. Cook Slow: Light and Healthy shows you just how versatile your slow cooker can be with effortless, nourishing recipes inspired by dishes from around the world. Avoid boring 'diet food' and cook slow to create healthy, wholesome food for balanced eating.

Don't own a slow cooker? Don't panic! The recipes in this book can be cooked either conventionally in the oven or in your slow cooker.

"I'm not going to go all scientific on you, but at 70°C (160°F) something magical happens. At that temperature, the so-called tougher of chewier cuts of meat begin to break down and become meltingly tender and a joy to eat. Basic ingredients can blend into something spectacular. Something as simple as a beef stew using inexpensive ingredients can become a delicious healthy meal the whole family can enjoy." - Dean Edwards

After coming second in BBC's Masterchef Goes Large in 2006, Dean Edwards sought to change his life radically by leaving his career as a digger driver to pursue his love of cooking and food.

Dean's likeable persona and family-friendly cooking style has made him a firm favourite on ITV's Lorraine since 2010, but he originally made his ITV debut on This Morning in September 2009, where he featured in a weekly cookery slot, creating dishes for the ITV audience.