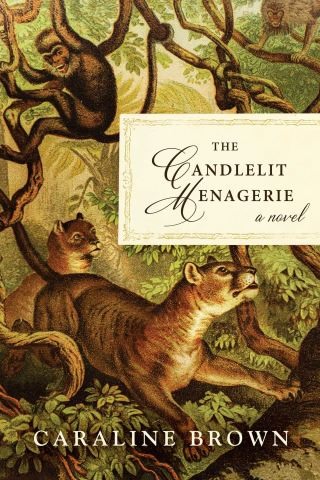 For fans of The Greatest Showman and Water for Elephants, The Candlelit Menagerie grabs hold and pulls readers into the dim halls of the exotic animal emporiums of London, over two centuries ago.

Set in late eighteenth-century London, this haunting debut novel features Lillian, a freakishly tall woman who struggles to fit into society because of her size and desire to wear trousers. Each morning, she wakes in her tiny maid's room in a too-small bed to the sound of a lion roaring nearby, on the Strand. One day, she investigates the sound and discovers a candlelit exotic animal emporium. When she meets the lion, there is an instant bond. At first, Lillian is repulsed by the stench and squalor, but there, in the menagerie, Lillian finds her natural home taking care of and befriending wild animals brought from around the world, stolen from their habitats, misfits like her. The British empire had become the dominate colonial power, plundering resources across the ocean, including humans and animals, and bringing them to England's shores for the first time to the amusement of the public. The menagerie, under Lillian's management, becomes a successful attraction. It is her life's mission. She even marries the veterinarian's single-minded apprentice. But when her unborn baby dies in an accident, she is given a chimpanzee to raise as her own child, upending the order of even Lillian's unusual existence.

Told in a simple, mesmerizing voice, The Candlelit Menagerie is intensely atmospheric and transporting. This stunning debut will put Caraline Brown at the forefront of the list of new novelists to watch.

Caraline Brown: Caraline Brown is an award-winning British businesswomen, having started her first PR company with nothing but a £2K loan. Her internet-focused approach revolutionized start-up business strategies. She left the PR world in 2017 to devote herself to writing. The Candlelit Menagerie is her magical debut. She lives in Brighton, England.