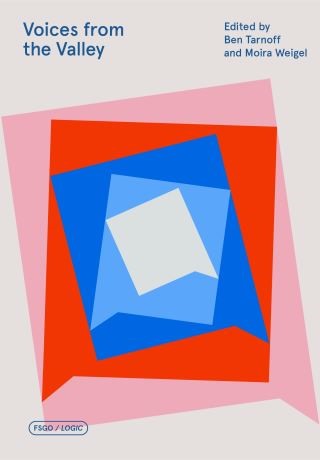 Voices from the Valley

From FSGO x Logic: anonymous interviews with tech workers at all levels, providing a bird's-eye view of the industry

In Voices from the Valley, the celebrated writers and Logic cofounders Moira Weigel and Ben Tarnoff take an unprecedented dive into the tech industry, conducting unfiltered, in-depth, anonymous interviews with tech workers at all levels, including a data scientist, a start-up founder, a cook who serves their lunch, and a PR wizard. In the process, Weigel and Tarnoff open the conversation about the tech industry at large, a conversation that has previously been dominated by the voices of CEOs. Deeply illuminating, revealing, and at times lurid, Voices from the Valley is a vital and comprehensive view of an industry that governs our lives.

FSG Originals × Logic dissects the way technology functions in everyday lives. The titans of Silicon Valley, for all their utopian imaginings, never really had our best interests at heart: recent threats to democracy, truth, privacy, and safety, as a result of tech’s reckless pursuit of progress, have shown as much. We present an alternate story, one that delights in capturing technology in all its contradictions and innovation, across borders and socioeconomic divisions, from history through the future, beyond platitudes and PR hype, and past doom and gloom. Our collaboration features four brief but provocative forays into the tech industry’s many worlds, and aspires to incite fresh conversations about technology focused on nuanced and accessible explorations of the emerging tools that reorganize and redefine life today.

Ben Tarnoff: Ben Tarnoff is the author of the books A Counterfeiter’s Paradise and The Bohemians and is a cofounder of Logic magazine. His writing has appeared in The Guardian, The New Republic, Jacobin, and Lapham’s Quarterly, among other publications. He lives in Cambridge, Massachusetts.|||Moira Weigel is the author of Labor of Love: The Invention of Dating. Her writing has appeared in The New York Times,The Atlantic, The New Yorker, The Guardian, The Nation, The New Republic, and n+1, among other publications, and she is a cofounder of Logic magazine. She received a fellowship to the Harvard Society of Fellows in 2016 and lives in Cambridge, Massachusetts.