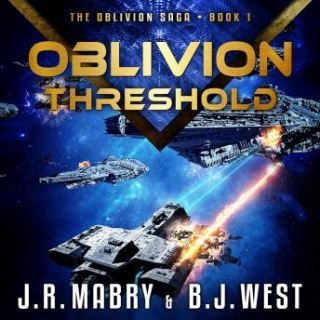 It isn’t a war—it’s a massacre. Mindless mechanical aliens are destroying everything in their path. And that path is headed straight for Earth…

This isn’t war. The Prox don’t even notice us. They are simply devouring and reclaiming every scrap of metal they encounter. They have destroyed several colonies, killing everyone and leaving only wreckage in their wake.

Captain Jeff Bowers is a shell of a man, reduced to solo missions where he can’t piss anybody off. He is spying on the Prox when his ship crashes and he dies…kind of. When he wakes up he discovers he has a new body—and mysterious powers that could save the Earth…or end all life as we know it.

Oblivion Threshold is the first book in the thrilling Oblivion Saga. If you love Star Trek and Starship Troopers, you simply cannot pass up this adventure.