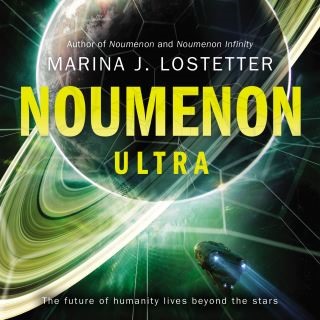 The mind-expanding journey that began with Noumenon and Noumenon Infinity continues in this wondrous mosaic tale of deep space exploration, adventure, and humanity that blends the awe, science, and speculative imagination of Arthur C. Clarke, Neal Stephenson, and Octavia Butler.

Deep in the heart of an alien mountain range, I.C.C. has lain dormant, its ships silent, for eons. Now, after one hundred thousand years, the AI is awakening. Someone is roaming the convoy's halls—someone that isn't human.

This planet, Noumenon—created by the megastructure known as the Web—is too young and brutal to have evolved intelligent life. Its surface is bombarded by unusual meteors. Crystal trees abruptly and violently arise from its bedrock. Its solar system is surrounded by a frightening space-time anomaly. So where did these visitors come from? What do they want? And do the people of Earth, whose ancestors launched Convoy Seven, know they are here?

I.C.C. reaches out to the descendants of its convoy crew to help decipher this primordial riddle. Noumenon was created and seeded by ancient aliens, and clearly their plans for it are unfinished. Together, the AI, the new lifeforms who have awakened it, and the humans will embark on an epic adventure of discovery billions of years in the making.

Marina J. Lostetter’s original short fiction has appeared in Lightspeed’s Women Destroy Science Fiction! and InterGalactic Medicine Show, among other publications. Originally from Oregon, the former winner of the Writers of the Future Award now lives in Arkansas with her husband, Alex, and enjoys globe-trotting, board games, and all things art-related.