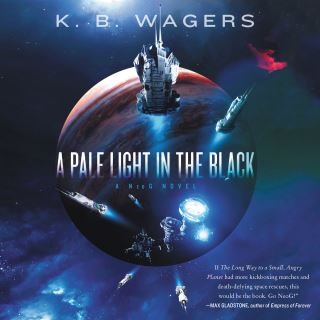 A Pale Light in the Black

The Expanse meets the Battle Room in Ender's Game as K. B. Wagers brings us the rollicking first entry in a unique science fiction series that introduces the Near-Earth Orbital Guard—NeoG—a military force patrolling and protecting space inspired by the real-life mission of the U.S. Coast Guard.

For the past year, their close loss in the annual Boarding Games has haunted Interceptor Team: Zuma’s Ghost. With this year’s competition looming, they’re looking forward to some payback—until an unexpected personnel change leaves them reeling. Their best swordsman has been transferred, and a new lieutenant has been assigned in his place.

Maxine Carmichael is trying to carve a place in the world on her own—away from the pressure and influence of her powerful family. The last thing she wants is to cause trouble at her command on Jupiter Station. With her new team in turmoil, Max must overcome her self-doubt and win their trust if she’s going to succeed. Failing is not an option—and would only prove her parents right.

But Max and the team must learn to work together quickly. A routine mission to retrieve a missing ship has suddenly turned dangerous, and now their lives are on the line. Someone is targeting members of Zuma’s Ghost, a mysterious opponent willing to kill to safeguard a secret that could shake society to its core . . . a secret that could lead to their deaths and kill thousands more unless Max and her new team stop them.

Rescue those in danger, find the bad guys, win the Games. It’s all in a day’s work at the NeoG.

K.B. Wagers is the author of the Indranan War trilogy as well as There Before the Chaos, the start of the Farian War trilogy with Orbit Books. They hold a Bachelor’s degree in Russian Studies and a second-degree blackbelt in Shaolin Kung Fu. A native of Colorado, K.B. lives at the base of the Rocky Mountains with their partner and a crew of recalcitrant cats. In between books, they can be found attempting to learn Spanish, dying in video games, dancing to music, and scribbling new ideas in their bullet journal.