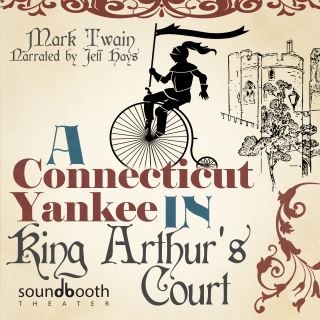 When Connecticut mechanic and foreman Hank Morgan is knocked unconscious, he wakes not to the familiar scenes of nineteenth-century America, but to the bewildering sights and sounds of sixth-century Camelot.

Although confused at first and quickly imprisoned, he soon realizes that his knowledge of the future can transform his fate. Correctly predicting a solar eclipse from inside his prison cell, Morgan terrifies the people of England into releasing him and swiftly establishes himself as the most powerful magician in the land, stronger than Merlin and greatly admired by Arthur himself. But the Connecticut Yankee wishes for more than simply a place at the Round Table. Soon, he begins a far greater struggle: to bring American democratic ideals to Old England.

Complex and fascinating, A Connecticut Yankee is a darkly comic consideration of the nature of human nature and society.

Mark Twain: Mark Twain, considered one of the greatest writers in American literature, was born Samuel Clemens in Florida, Missouri, in 1835, and died in Redding, Connecticut in 1910. As a young child, he moved with his family to Hannibal, Missouri, on the banks of the Mississippi River, a setting that inspired his two best-known novels, The Adventures of Tom Sawyer and Adventures of Huckleberry Finn. In his person and in his pursuits, he was a man of extraordinary contrasts. Although he left school at 12 when his father died, he was eventually awarded honorary degrees from Yale University, the University of Missouri, and Oxford University. His career encompassed such varied occupations as printer, Mississippi riverboat pilot, journalist, travel writer, and publisher. He made fortunes from his writing but toward the end of his life he had to resort to lecture tours to pay his debts. He was hot-tempered, profane, and sentimental—and also pessimistic, cynical, and tortured by self-doubt. His nostalgia for the past helped produce some of his best books. He lives in American letters as a great artist, described by writer William Dean Howells as “the Lincoln of our literature.” Twain and his wife, Olivia Langdon Clemens, had four children—a son, Langdon, who died as an infant, and three daughters, Susy, Clara, and Jean.