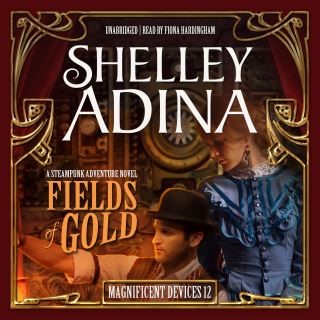 If a wedding won't stop a war, what will?

Gloria Meriwether-Astor's belief in doing the right thing has carried her across the world and through dangers that would have felled a lesser woman. She believed that if she married the dashing Captain Fremont, she could approach the Viceroy of the Royal Kingdom of Spain and the Californias with impunity. She could convince the prince to stop the war their fathers began, and then she could return to Philadelphia with her husband, her conscience clear at last. Sadly, belief and reality are two different things. The prince agrees to her proposal on one condition—that she annul her marriage and become his wife instead!

Every woman has a threshold she will not cross. Gloria has come to love her riverboat captain, and the price of peace is simply too high. But when the evil stalking the pleasant gardens of San Luis Obispo de Tolosa claims its victim, the time for belief is over and the time to act—daringly, outrageously—is at hand. Do the witches hold the key to a way out of this trap?

All Gloria has to do is take up the crown of roses and play for the highest stakes. All she has to do is become the iron dragon … and start a war of her own.

Shelley Adina holds an MFA in Writing Popular Fiction and is working on her PhD in Creative Writing at Lancaster University in the UK. She won the 2005 RITA Award for Inspirational Romance and was a Christy Award finalist in 2009. Between books, Adina loves making period costumes and spoiling her flock of rescued chickens.