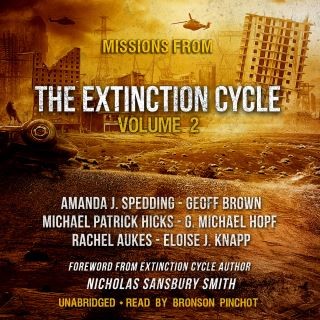 Missions from the Extinction Cycle, Vol. 2

Missions from the Extinction Cycle, Volume 2

The bestselling Extinction Cycle series by Nicholas Sansbury Smith first introduced readers to a world ravaged by an engineered virus that turned men into monsters. Billions died, civilization collapsed, and the human race teetered on the brink of extinction. Humanity’s only hope was not a cure, but another bioweapon. When deployed, it killed ninety percent of the infected, but the remaining ten percent transformed into even more terrifying creatures called Variants.

Heroes have risen up to meet these abominations. Men like Master Sergeant Reed Beckham of Delta Force Team Ghost and Marine Corporal Joe Fitzpatrick. Women like Dr. Kate Lovato and firefighter Meg Pratt. Throughout the world, survivors band together to fight the evolving monsters in an effort to save humanity.

This second collection of Extinction Cycle missions include; heroic last stands, the transformation of men into beasts, and hardened warriors engaged in battle against overwhelming odds. All from some of the leading voices in the post-apocalyptic genre. Strap in, you’re about to experience more of the Extinction Cycle.

From the Ashes by Michael Patrick Hicks

G. Michael Hopf is the author of The End, The Long Road, Sanctuary, and The Line of Departure. He spent two decades living a life of adventure before settling down to pursue his passion for writing. He is a former combat veteran of the US Marine Corps and former bodyguard. He lives with his family in San Diego, California.

Rachel Aukes is the award-winning author of 100 Days in Deadland, which made the Best of the Year list by Suspense Magazine. Her other series include the Fringe series, the Deadland Saga, and the Colliding Worlds Trilogy. A licensed pilot, she can be found flying old airplanes over the Midwest countryside with her husband and an incredibly spoiled, fifty-pound lapdog. She lives near Ames, Iowa.