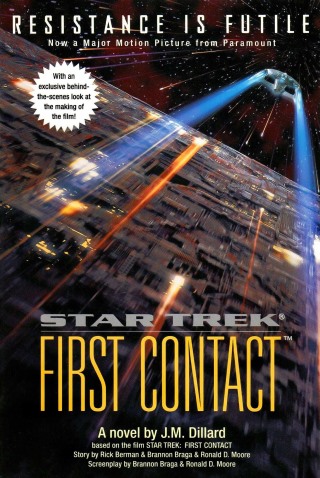 The official novelization of the widely acclaimed major motion picture based on Star Trek: The Next Generation!

From the deepest, darkest reaches of space came the greatest threat the United Federation of Planets had ever faced: the Borg, a half-organic, half-mechanical species relentlessly bent on conquering and “assimilating” all intelligent life into their collective. Only through the courage and determination of the USS Enterprise crew was Captain Jean-Luc Picard able to be rescued from his own abduction and assimilation by the Borg and this alien menace prevented from destroying Earth itself.

Now, several years later, the Borg are back and more dangerous than ever, launching a new attack against the heart of the Federation—one that simultaneously threatens Earth’s past, present, and future. As Captain Picard and the Enterprise crew risk their lives alongside unexpected allies, they must all stand against their greatest foe in a startling confrontation across time, even as the Borg Collective’s deadliest secret and its true face are finally revealed…

J.M. Dillard: J.M. Dillard grew up coddled in the wilds of central Florida. After leaving her mother’s sheltering arms, she left Florida to reside in various locales, including Washington, DC, Vermont, and southern California. She herself now coddles a two-hundred-pound husband and two ninety-pound Labradors, all of whom are well-trained but persist in believing themselves to be lapdogs. She is the author of a plethora of Star Trek® books; as Jeanne Kalogridis (her evil alter-ego), she is the author of the acclaimed Diaries of the Family Dracul trilogy, and the historical fantasy The Burning Times.