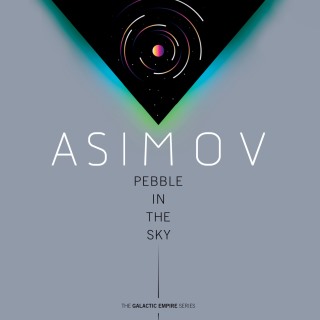 Pebble in the Sky

The third and final book in the Galactic Empire series, the spectacular precursor to the classic Foundation series, by one of history’s most influential writers of science fiction, Isaac Asimov

After years of bitter struggle, Trantor had at last completed its work—its Galactic Empire ruled all 200 million planets of the Galaxy . . . all but one. On a backward planet called Earth were those who nurtured bitter dreams of a mythical, half-remembered past when the planet was humanity’s only home. The other worlds despised it or merely patronized it—until a man from the past miraculously stepped through a time fault that spanned a millennium, living proof of Earth’s most preposterous claims.

Joseph Schwartz was a happily retired Chicago tailor circa 1949. Trapped in an incredible future he could barely comprehend, the unlikely time traveler would soon become a pawn in a desperate conspiracy to bring down the Empire in a twist of agony and death—a mad plan to restore Earth’s tarnished glory by ending human life on every other world.

Isaac Asimov: Isaac Asimov began his Foundation series at the age of 21, not realizing that it would one day be considered a cornerstone of science fiction. During his legendary career, Asimov penned over 470 books on subjects ranging from science to Shakespeare to history, though he was most loved for his award-winning science fiction sagas, which include the Robot, Empire, and Foundation series. Named a Grand Master of Science Fiction by the Science Fiction and Fantasy Writers of America, Asimov entertained and educated readers of all ages for close to five decades. He died, at the age 72, in April 1992.

JON LINDSTROM is a three-time Emmy Award nominated actor. He has starred and co-starred in many feature films and television shows, including Amazon's Bosch and HBO's True Detective. He is perhaps best known for his celebrated portrayal of twin brothers, Kevin Collins and Ryan Chamberlain, on General Hospital.