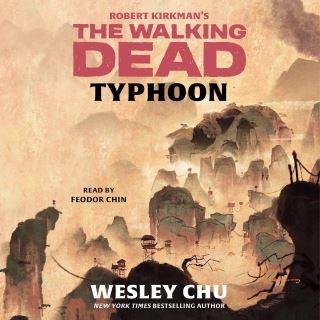 In this riveting, “gory, and action-packed” (Jonathan Maberry) survival thriller, set in the expansive world of Robert Kirkman’s The Walking Dead series, three people from different walks of life in China must join forces against the typhoon of undead as chaos sweeps over Asia.

In the aftermath of the zombie virus outbreak, what remains of the Chinese government has estimated that one billion walkers (called jiangshi) are currently roaming through the country. Across this dramatic landscape, large groups of survivors have clustered together for safety in villages and towns that have been built vertically as a means of protection against the unceasing wave of jiangshi.

Before this devastation, Zhu was one of the millions of poor farmers who left their rural roots for the promise of consistent employment in one of China’s booming factory towns. Elena was an American teaching English in China while on a gap year before beginning law school. Hengyen was a grizzled military officer of some renown, and a passionate believer in his nation’s ability to surmount any obstacle.

But with the settlement’s 3,000 mouths to feed and the scavengers having to travel further and further in search of food, Zhu ends up at his home village, where he is shocked to find survivors. Does he force them to join the settlement or keep their existence a secret?

Meanwhile, Hengyen is tasked with the impossible: fortifying the Beacon against a 100,000-strong “typhoon” of walkers header their way. Even though he realizes that the Beacon hardly stands a chance, Hengyen is a believer and will stand with his compatriots to the very last, bringing him into conflict with Zhu, who intends to flee the path of the typhoon and make for the safety of China’s dramatic mountain ranges before it’s too late.

Given “two decaying thumbs up,” (Jonathan Mayberry, author of Rot & Ruin), this book is sure to get your heart racing and leave you wanting more!

Wesley Chu: Wesley Chu won the John W. Campbell Award for Best New Writer. His debut novel, The Lives of Tao, earned him a Young Adult Library Services Association Alex Award and a Science Fiction Goodreads Choice Award Top 10 slot. He is also the coauthor of the Eldest Curses series with Cassandra Clare, the first book of which debuted at #1 on the New York Times bestseller list.