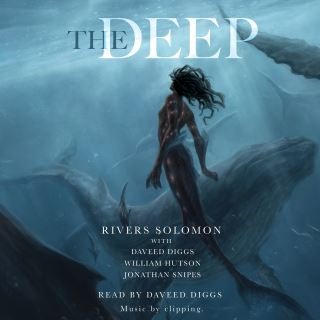 Yetu holds the memories for her people—water-dwelling descendants of pregnant African slave women thrown overboard by slave owners—who live idyllic lives in the deep. Their past, too traumatic to be remembered regularly, is forgotten by everyone, save one—the historian. This demanding role has been bestowed on Yetu.

Yetu remembers for everyone, and the memories, painful and wonderful, traumatic and terrible and miraculous, are destroying her. And so, she flees to the surface, escaping the memories, the expectations, and the responsibilities—and discovers a world her people left behind long ago.

Yetu will learn more than she ever expected to about her own past—and about the future of her people. If they are all to survive, they’ll need to reclaim the memories, reclaim their identity—and own who they really are.

Inspired by a song produced by the rap group Clipping for the This American Life episode “We Are In The Future,” The Deep is vividly original and uniquely affecting.

Rivers Solomon: Rivers Solomon is the author of An Unkindness of Ghosts, and was a finalist for the John W. Campbell Award finalist for Best New Writer. They graduated from Stanford University with a degree in comparative studies in race and ethnicity and hold an MFA in fiction writing from the Michener Center for Writers. Though originally from the United States, they currently live in Cambridge, England, with their family. Find them on Twitter @CyborgYndroid.|||Daveed Diggs is an actor, singer, producer, writer, and rapper. He is the vocalist of the experimental hip hop group Clipping. Diggs originated the role of Marquis de Lafayette/Thomas Jefferson in the 2015 musical Hamilton by Lin-Manuel Miranda which he won a Grammy and Tony for. He also cowrote, produced, and stars in the film Blindspotting. Find him on Twitter @DaveedDiggs.|||William Hutson is a composer, known for Room 237 (2012), The Mayor (2017), and Ten Minutes Is Two Hours (2013). He is part of the rap group Clipping. Find him on Twitter @Clppng.|||Jonathan Snipes is a composer and sound designer for film and theater living in Los Angeles. He occasionally teaches sound design in the theater department at UCLA, and is a member of the rap group Clipping. Find him at Jonat8han.com.