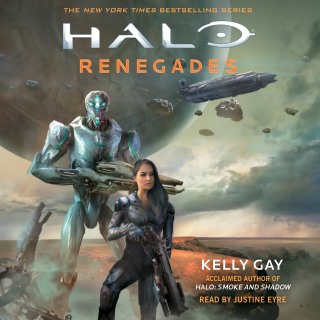 An original full-length novel set in the Halo universe and based on the New York Times bestselling video game series!

Find. Claim. Profit. In a post-Covenant War galaxy littered with scrap, it’s the salvager’s motto—and Rion Forge certainly made her mark on the trade. All she wanted was to grow her business and continue the search for her long-lost father, but her recent discovery of a Forerunner debris field at the edge of human-occupied space has now put her squarely in the crosshairs of the Office of Naval Intelligence and the violent remains of the Covenant. Each faction has a desire to lay claim to the spoils of ancient technology, whatever the cost, sending Rion and the crew of the Ace of Spades on a perilous venture—one that unexpectedly leads them straight into danger far greater than anything they’ve ever encountered…

Kelly Gay: Kelly Gay is the critically acclaimed author of the Charlie Madigan urban fantasy series. She is a multi-published author with works translated into several different languages. She is a two-time RITA nominee, an ARRA nominee, a Goodreads Choice Award Finalist, and a SIBA Book Award Long List finalist. Kelly is also the recipient of the North Carolina Arts Council Fellowship Grant in Literature. She has authored the short story, “Into the Fire,” featured in Halo: Fractures, and the novella, Halo: Smoke and Shadow. She can be found online at KellyGay.com.