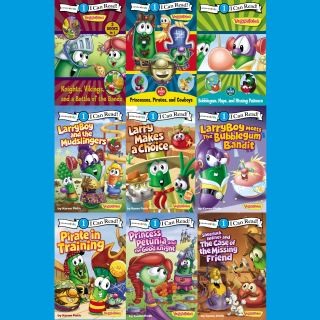 VeggieTales I Can Read Collection

This audiobook bundle includes favorite I Can Read! titles from the VeggieTales series:

LarryBoy and the Mudslingers

Sheerluck Holmes and the Case of the Missing Friend

Princess Petunia and the Good Knight

What’s Up with Lyle?

Junior Battles to Be His Best

Bob and Larry in the Case of the Missing Patience

Throughout her career, Karen Poth has held various positions in the Children's Entertainment Industry including Vice President of Design at Big Idea/VeggieTales, Product Developer at Walt Disney World, CCO of SpringSprang Studio, and Kid's Innovation Strategist at Hallmark Cards. She holds a master’s degree in Journalism from the University of Missouri. She lives with her husband and seven-year-old son in Lenexa, KS.

Doug Peterson is an award-winning author who has put his talents to good use in chronicling the adventures of Larryboy, including co-writing the best-selling VeggieTales video, “Larryboy and the Rumor Weed.”