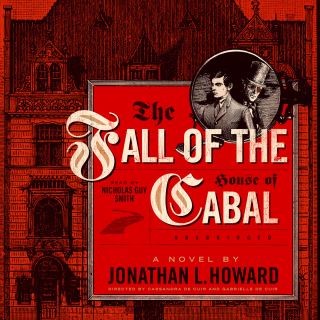 The Fall of the House of Cabal

Johannes Cabal, a necromancer of some little infamy, has come into possession of a vital clue that may lead him to his ultimate goal: a cure for death. The path is vague, however, and certainly treacherous as it takes him into strange territories that, quite literally, no one has ever seen before. The task is too dangerous to venture upon alone, so he must seek assistance, comrades for the coming travails.

Assisted—ably and otherwise—by his vampiric brother, Horst, and by the kindly accompaniment of a criminologist and a devil, they will encounter ruins and diableries, mystery and murder, the depths of the lowest pit, and a city of horrors—London, to be exact.

Yet even though Cabal has risked such peril believing he understands the dangers he faces, he is still underestimating them. He is walking into a trap of such arcane complexity that even the one who drew him there has no idea of its true terrors. As it closes slowly and subtly around them, it may be that there will be no survivors at all.

Jonathan L. Howard is a game designer, scriptwriter, and a veteran of the computer game industry since the early 1990s, with titles such as the Broken Sword series to his credit. He is author of the Johannes Cabal and Goon Squad series, available on audio from Blackstone and Skyboat Media. He lives in the United Kingdom with his wife and daughter.

Nicholas Guy Smith is a highly rated and diverse voice-over actor who has been heard in feature films, television commercials, and video games. He has voiced characters for Disney, Warner Brothers, Universal, and the Cartoon Network.

Gabrielle de Cuir, award-winning narration, has narrated over two hundred titles and specializes in fantasy, humor, and titles requiring extensive foreign language and accent skills. She was a cowinner of the Audie Award for best narration in 2011 and a three-time finalist for the Audie and has garnered six AudioFile Earphones Awards. Her "velvet touch" as an actor's director has earned her a special place in the audiobook world as the foremost producer for bestselling authors and celebrities.

Nicholas Guy Smith, an AudioFile Earphones Award-winning narrator, is a highly rated and diverse voice-over actor who has been heard in feature films, television commercials, and video games. He has voiced characters for Disney, Warner Brothers, Universal, and the Cartoon Network.