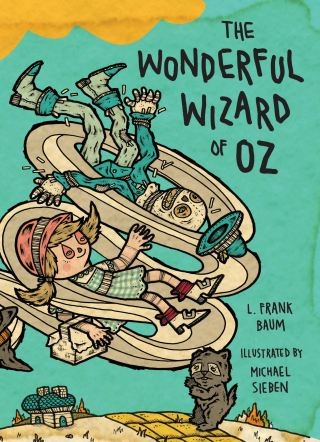 The Wonderful Wizard of Oz

In this dazzling full-color gift edition, L. Frank Baum's The Wonderful Wizard of Oz is brought to life with specially commissioned illustrations by contemporary artist and designer Michael Sieben.

Follow the yellow brick road with Dorothy and her friends as they travel to the Emerald City in search of the great Wizard of Oz in this new, complete and unabridged edition of the classic tale that winds its way from Kansas to faraway places and back. From the land of the Munchkins to the deadly poppy field, from encounters with ferocious Kalidahs, Winged Monkeys, and Fighting Trees to battles with the Wicked Witches of the East and West, the magic of Baum's story is beautifully reimagined through the extraordinary art of Michael Sieben.

L. Frank Baum (1856-1919) published The Wonderful Wizard of Oz in 1900 and received enormous, immediate success. Baum went on to write seventeen additional novels in the Oz series. Today, he is considered the father of the American fairy tale. His stories inspired the 1939 classic film The Wizard of Oz, one of the most widely viewed movies of all time.

MinaLima is an award-winning graphic design studio founded by Miraphora Mina and Eduardo Lima, renowned for establishing the visual graphic style of the Harry Potter and Fantastic Beasts film series. Specializing in graphic design and illustration, Miraphora and Eduardo have continued their involvement in the Harry Potter franchise through numerous design commissions, from creating all the graphic elements for The Wizarding World of Harry Potter Diagon Alley at Universal Orlando Resort, to designing award-winning publications for the brand. Their best-selling books include Harry Potter and the Philospher’s Stone, Harry Potter Film Wizardry, The Case of Beasts: Explore the Film Wizardry of Fantastic Beasts and Where to Find Them, The Archive of Magic: Explore the Film Wizardry of Fantastic Beasts: The Crimes of Grindelwald, and J.K. Rowling’s Fantastic Beasts screenplays. MinaLima studio is renowned internationally for telling stories through design and has created its own MinaLima Classics series, reimagining a growing collection of much-loved tales including Peter Pan, The Secret Garden, and Pinocchio.